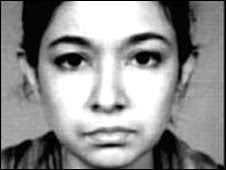 Portrait of an al Qaeda "Islamo-Fascist?": " ... Some reports say Aafia Siddiqui was part of an al-Qaeda sleeper cell ... Aafia Siddiqui is the youngest of three children of a British-trained doctor. Her brother is an architect based in Houston, while Fauzia is a neurologist who used to work at Mount Sinai hospital in New York. Aafia Siddiqui went to school in Karachi and graduated with a biology degree from the Massachusetts Institute of Technology (MIT) in the US. ... She continued with her studies, enrolling in Brandeis University near Boston for a PhD in neuro-cognitive science. Her degree has often been misreported as being in microbiology or genetics. ... "

Aafia Siddiqui, whom the US accuses of al-Qaeda links, vanished in Karachi with her three children on 30 March 2003.

The next day it was reported in local newspapers that a woman had been taken into custody on terrorism charges. Initially, confirmation came from a Pakistan interior ministry spokesman. But a couple of days later, both the Pakistan government and the FBI publicly denied having anything to do with her disappearance.

Two days after Aafia Siddiqui went missing, "a man wearing a motor-bike helmet" arrived at the Siddiqui home in Karachi, her mother told the BBC. "He did not take off the helmet, but told me that if I ever wanted to see my daughter and grandchildren again, I should keep quiet," Ms Siddiqui's mother told me over the phone in 2003. The mother, who has since died, also related the affair to other newspapers.

But the government continued to deny having anything to do with her daughter's disappearance. This is despite the fact that Mrs Siddiqui's other daughter, Fauzia, says she was told by then Interior Minister Syed Faisal Saleh Hayat in 2004 that her sister had been released and would return home shortly.

Research at the time refused to turn up anything on the status of Aafia Siddiqui - she was not listed as wanted by any federal or Pakistani agency. At that point, it seemed she had vanished off the face of the earth.

Aafia Siddiqui is the youngest of three children of a British-trained doctor. Her brother is an architect based in Houston, while Fauzia is a neurologist who used to work at Mount Sinai hospital in New York. Aafia Siddiqui went to school in Karachi and graduated with a biology degree from the Massachusetts Institute of Technology (MIT) in the US.

Demonstrations have been held in Karachi calling for Ms Siddiqui's release It was during this time that she got actively involved in on-campus Islamic activities.

A fellow Pakistani student recalls her as being one of the "hello, brother" types.

"They were the ones with scarves who used to get after us to come to the association meetings," the student, Hamza, told the BBC. "I remember Aafia as being sweet, mildly irritating but harmless. You would run into her now and then distributing pamphlets."

After graduation, Aafia Siddiqui married Muhammad Amjad Khan, a young Pakistani doctor in Boston. She continued with her studies, enrolling in Brandeis University near Boston for a PhD in neuro-cognitive science. Her degree has often been misreported as being in microbiology or genetics.

At that time, her main problems arose from married life. She and her husband argued over where to bring up their children.

"Aafia wanted them to be brought up in the US and receive a Western education, but Amjad was against it," her mother said in 2003.

The 11 September 2001 attacks in the US changed everything. Her husband was detained by the FBI for questioning.

Aafia Siddiqui reappeared five years later in US custody in Afghanistan
The reason was his purchase of night vision goggles, body armour and military manuals. He is said to have told the FBI it was for big-game hunting.

Aafia Siddiqui was also questioned briefly, but later released, as was her husband. Soon, they decided to return to Pakistan, citing the increasing discrimination against Muslims in the US following the 9/11 attacks.

In Pakistan, the already estranged couple soon separated, and they divorced in 2002, while she was pregnant with their third child. Following the birth, Aafia Siddiqui worked briefly in Baltimore, US, before returning to Pakistan in December 2002, where she disappeared months later.

Various theories about her disappearance started to appear in international and local publications. The first of these was on 23 June 2003 - three months after her disappearance - in Newsweek. An investigative report, calling her a micro-biologist, said she and her husband were part of an al-Qaeda sleeper cell.

In Baltimore, she is alleged to have opened a mailbox for a suspected al-Qaeda operative now in Guantanamo Bay. Majid Khan has been accused of planning to blow up petrol stations across the US.

The charges started to mount.

In 2004 then-FBI director Robert Mueller announced at a press conference that Aafia Siddiqui was wanted for questioning. She was later named as part of an alleged al-Qaeda diamond smuggling operation in Liberia.

Publications such as Newsweek quoted the FBI as saying this was to finance al-Qaeda's biological and chemical weapons programme.

After that, her name remained on the list of disappeared - until she surfaced last month in Afghanistan in US military custody.

Aafia Siddiqui is now to appear in court in the US on charges of assaulting and attempting to kill US personnel while in detention in Afghanistan. The FBI has been unable to make any of the other charges stick.

"It is always believed one is innocent until proven guilty, not the other way round," her sister, Fauzia, told reporters in Karachi on Tuesday. She added that every time she had met US officials, they had said they had never formally accused Aafia Siddiqui of being a terrorist.

Ex-security officials also point out that if Ms Siddiqui was detained for being a terror suspect, her ex-husband, who is free, should have been too.

Why, then, would Aafia Siddiqui have been arrested and kept in secret confinement for so long?

The answer may lie in her relationship with the family of alleged 9/11 mastermind Khalid Sheikh Mohammed. Aafia Siddiqui is said to have married Ali Abd'al Aziz Ali, one of his nephews following her divorce.

That may be the only "crime" that Aafia Siddiqui has committed.

In the eyes of US and Pakistani security officials, it was apparently too big to ignore.

http://news.bbc.co.uk/2/hi/americas/7544008.stm
•••••••
A Confederacy of Kangaroos: This AP release has to be read in its entirety to appreciate the contradictions in the government's case. The article opens with damning statements from the prosecution that flip in midcourse - some completely reverse themselves, like otters splashing around at Sea World - so you have to read it all to know how the case deconstructs. Note that Aafia Siddiqui is bleeding profusely in the courtroom, her bullet wound "oozing" - but the judge berates her for not standing, and presses on with the trial, undeterred by open bullet wounds. - AC
•••
NY charges for woman in Afghan military shooting
AUG 5, 2008
BY TOM HAYS, AP

NEW YORK (Map, News) - An MIT-educated Pakistani woman linked to al-Qaida appeared in federal court Tuesday to face charges she tried to kill U.S. employees in a gunfight in Afghanistan after police said they discovered suspicious documents about explosives and landmarks in her handbag.

Aafia Siddiqui, wearing a burgundy head scarf and recovering from a gunshot wound, was ordered held without bail on one count each of attempted murder and assault stemming from the July incident. She had been arrested Monday in Afghanistan and flown to New York to be formally charged.

"Your honor, she's been shot," a defense attorney told a federal magistrate when asked to explain why her client preferred not to stand during the hearing. "She has a wound, and it's oozing."

Magistrate Ronald Ellis set a Monday hearing to determine whether Siddiqui should be released on bail. He also said he would ask prison officials to make sure she was receiving proper care.

Prosecutors allege Siddiqui, 36, was stopped by police on July 17 outside a government building in central Afghanistan's Ghazni province. Police searched her handbag and discovered documents containing recipes for explosives and chemical weapons and describing "various landmarks in the United States, including New York City," according to a criminal complaint, which did not identify the landmarks.

Siddiqui also was carrying "chemical substances in gel and liquid form that were sealed in bottles and glass jars," the complaint said without elaborating.

The next day, as a team of FBI agents and U.S. military officers prepared to question Siddiqui, she snatched a soldier's rifle and pointed it at an Army captain, prosecutors said. An interpreter pushed the rifle aside as she fired two shots, which missed, they said. One of two shots fired by a soldier in response hit her in one of her hips.

Even after being hit, Siddiqui struggled and shouted in English that she wanted "to kill Americans" before the officers subdued her, the complaint said.

Asked by the judge if she understood the charges, she replied in a soft voice, "I understand them."

At the time of the incident, Afghan officials gave conflicting accounts of what transpired between Siddiqui and the U.S. interrogators.

Gen. Khan Mohammad Mujahid, police chief in central Ghazni province, initially said police argued with the Americans over giving up custody of Siddiqui. But he later said there was no argument and that the woman lunged at one of the U.S. soldiers, drawing the gunshot.

On Tuesday, an Afghan official in Ghazni said the woman took the weapon while U.S. officials were arguing with Afghan security official over the custody rights. The official spoke on condition of anonymity because he was not authorized to speak about the issue.

Siddiqui's defense attorney, Elizabeth Fink, argued that alleging a "90-pound woman" could incite the violence claimed in the complaint was "patently absurd."

"We don't know what happened," Fink said. "All I know is that I have a person who's shot here."

In court, prosecutors said that Siddiqui was given good medical care and that a physician had accompanied her on the flight to the United States. They did not discuss the case any further.

At a 2004 news conference, then-Attorney General John Ashcroft and FBI Director Robert Mueller III identified Siddiqui as one of seven people the FBI wanted to question about their suspected ties to al-Qaida - an allegation her family has vehemently denied.

U.S. authorities said at the time that Siddiqui had received a biology degree from the Massachusetts Institute of Technology and had written a doctoral thesis on neurological sciences at Brandeis University, outside Boston. They said they believed she returned to Pakistan shortly after the Sept. 11 attacks and later vanished for several years.

Though they never alleged Siddiqui was a full-fledged member of al-Qaida, they said they believed she could be a "fixer," someone with knowledge of the United States who supported other operatives trying to slip into the country and plot attacks.

If convicted, Siddiqui faces up to 20 years in prison on each charge.