The Media 9/11 Debunking Machine is now a Smoking Gun 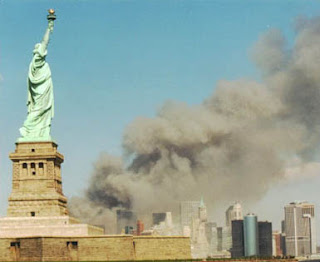 (CINCINNATTI, Ohio) - When 9/11 Commission Chief Counsel, John Farmer, released his book, The Ground Truth, debunking his own 9/11 commission report and was supported by Chairman Thomas Kean and commission member Senator Bob Kerrey with no dissent, the cover story of 9/11 died.

This leaves us with these inescapable facts:

* We no longer have an official answer to questions about 9/11.

* Perjured testimony and falsified information given to the original commission is a criminal act and demands a Grand Jury investigation and Special Prosecutor.

* Hundreds of respected leaders of the military, law enforcement, intelligence and scientific communities question the credibility of an investigation now proven beyond a doubt a conspiracy in itself.

* The institutions of government, including all 3 branches, Executive, Judicial and Legislative have combined in an unexplainable way in their failure to respond to circumstances that legally require action.

* The press has continued a pattern of distortion of facts, suppression of news and has engaged in a systematic campaign of deception.

Years have passed and soon 10,000 Americans will have died. Taking into account the epidemic of veterans suicides, we may have already passed that figure now. The cascade of events, financial collapse, government spying, oil price fixing, massive military corruption and a dozen more issues as serious have been able to move beyond our ability of everyday citizens to influence.

In fact, the most corrupt and debased groups involved in the 9/11 coverup are being actively recruited by the press as a patriotic resistance.

The tone for the coverup is being set by Australian media mogul, Rupert Murdoch, who controls much of the press in the US and United Kingdom. It doesn't take a rocket scientist to see Murdoch's role in covering up 9/11. His networks created the "9/12ers" who are continuing the coverup and Murdoch employees like Fox funnyman, Glenn Beck, are still a major part of the effort to protect those in government who lied to the commission and may have aided the conspirators.

Murdoch's media has held to "party line" on 9/11 and the Iraq/Afghanistan war since day one, suppressing facts any time they threatened an agenda of broad regional war or supported limiting government power to operate above the law.

Conspiracy theorists, largely proven correct thus far, refer to Murdoch's position as leader of the Israeli ultra-right wing Zionist movement as a rationale for his continued involvement in the cover up. No proof of Israeli involvement in the planning and execution of 9/11 has been offered except for Murdoch's relentless disinformation campaign.

Geopolitical theorists accuse Murdoch of orchestrating a plan for Israel to draw America into a wide set of conflicts in the Middle East, tying down forces for many years, while Israel extends broad economic influence into Georgia, Azerbaijan, Turkmenistan, Uzbekistan and Kazakhstan. The massive oil and gas reserves of the area, formerly the Jewish Kazhak empire, represent one of the greatest economic prizes in the world.

Only Iran threatens Israel's goals in this area.

Over 40 years ago, the US and Israel engaged in a false flag operation against an American warship called the USS Liberty. The plan was for Israel to attack and sink an American ship, kill the crew and the US would blame Egypt, invade and oust Soviets from the Middle East and control the worlds oil supply.

We only know that 9/11 was not what we were told it was and that it is being covered up by propagandists tied to Israeli extremists. Can we make assumptions from this? I say no but we can and should ask questions.

However, anyone asking a question or advocating an investigation is subjected to vicious personal attacks not limited to attempts to influence violence. The 400% increase in threats against the current president can easily be traced to their source in the media industry.

Was the Bush administration trying to repeat the Middle Eastern takeover tried by Lyndon Johnson long ago? Exposure of their plans to invade Iraq, made long before 9/11 need to be added into the equation.

9/11 could be a massive American intelligence failure with NORAD and the DOD melting down for lack of leadership. The lies told afterward could have been the result of embarrassment at total incompetence.

Nothing points to solid proof that 9/11 was staged by the US, with or without Israel. A long string of odd coincidences and a few violations of the laws of physics don't prove a massive conspiracy, not in themselves. They only raise a need for impartial investigation.

One thing can't be explained. Why are lies, known lies, still being broadcast daily, lies orchestrated from one source, meant to suppress an honest accounting of what may have been a series of mistakes?

Why go so far to cover up mistakes if they were only mistakes? With no 9/11 Commission standing behind the report that was meant to clear the Bush administration of responsibility, why is the Murdoch propaganda machine, the Wall Street Journal, Fox, Hannity, Beck and gang so busy burying something that doesn't exist? 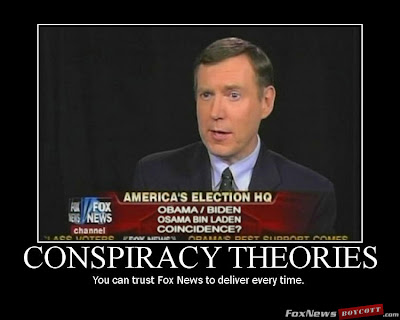 Some of the most vociferous critics of 9/11 "conspiracy theories" move on to engage in ridiculous conspiracy theories themselves. Fox News, for instance, has promoted Birthers and finds the Executive Office involved in a slew of lucicrous "socialist-Nazi" plots - employing rhetorical tools of McCarthyism and Holocaust denial. Ridicule is their most effective tactic. Others include reductio ad absurdum, lumping legitimate research with conspiratorial garbage (Birther claims, for instance) planted on the web by the far-right and intelligence assets, also unbridled disinformation. - AC

* The Media War Against “Conspiracy Theorists”: The World According to CIA Mockingbird Richard Miniter

* Establishment Media Debunkers of Conspiracy Research - Who are They? (Part One): RM Scaife Concubine Emerson Vermaat

* Establishment Media Debunkers of Conspiracy Research - Who are They? (Part Two): Lev Grossman, the Time Reporter who Hated V for Vendetta

* The Media 9/11 Debunking Machine is now a Smoking Gun

* Two Fake Books on the Kennedy Assassination, Ultimate Sacrifice & Legacy of Secrecy, Shift the Onus from the CIA to the Mafia

* Obama Staffer wants ‘Cognitive Infiltration’ of 9/11 Conspiracy Groups
Posted by Alex Constantine at 11:24 AM No comments:

Thousands of 9/11 Workers can now Sue over Illnesses

Thousands of sickened 9/11 recovery workers whose legal claims have been barred because of missed deadlines can now join a massive group suing New York City under a law signed by Gov. David A. Paterson, officials said.

The law immediately allows more than 3,000 Ground Zero workers to revive lawsuits that were thrown out by a federal judge in July on the technical ground that they were not filed within 90 days of the workers' conditions being diagnosed. ...

STORY AT NEWSDAY.COM
Posted by Alex Constantine at 12:45 PM No comments: