First, former CIA Director George Tenet told the president it was a "slam dunk" that Iraq had weapons of mass destruction. Then came efforts by the Bush White House to discredit critics, like ambassador Joe Wilson, who questioned the wisdom of going to war in Iraq.

Now comes a new book by author Ron Suskind claiming that the White House ordered the CIA to forge and backdate a handwritten letter from the head of Iraqi intelligence to Saddam Hussein to link the Iraq regime to Al Qaeda. The White House calls the assertion nonsense.

In The Way of the World, to be published today, Suskind writes:

The White House had concocted a fake letter from Habbush to Saddam, backdated to July 1, 2001. It said that 9/11 ringleader Mohammad Atta had actually trained for his mission in Iraq –- thus showing, finally, that there was an operational link between Saddam and al Qaeda, something the vice president’s office had been pressing CIA to prove since 9/11 as a justification to invade Iraq. There is no link.

Suskind says the order to forge such a letter was written on “creamy White House stationery” but gives no details about how it was created or how it was delivered to Iraq ... 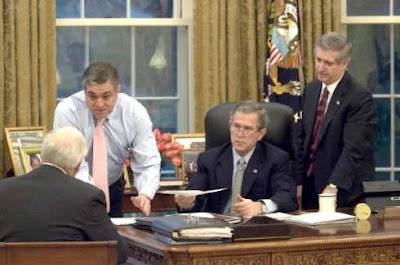 The book, "The Way of the World," was immediately attacked by the White House, the CIA and former CIA director George Tenet who is alleged to have passed the White House order to senior CIA operators.

"There was no such order from the White House to me nor, to the best of my knowledge, was anyone from CIA ever involved in any such effort," Tenet said in a statement.

In an interview with National Public Radio, Suskind said his account came from the former head of the Near East Division, Rob Richard, and others "right in the thick of this operation."

"Tenet turns to Richard, as he remembers it, and says, 'Listen, Marine' -- Richard is a former marine -- 'you're not going to like this, but here goes."

According to Suskind, the White House gave Tenet a letter to be rewritten in the hand of Tarir Jallil Habbush, a former Iraqi intelligence chief in CIA protective custody after the 2003 US invasion.

The letter, dated July 2001, had Habbush saying Iraq had hosted Mohammed Atta, the lead September 11 hijacker, who "displayed extraordinary effort and showed a firm commitment to lead the team which will be responsible for attacking the targets that we have agreed to destroy," according to the book.

"The idea was to take the letter to Habbush and have him transcribe it in his own neat handwriting on a piece of Iraqi government stationery to make it look legitimate," Suskind wrote.

"CIA would then take the finished product to Baghdad and have someone release it to the media," he wrote.

The July 2001 dated letter surfaced in Britain in December 2003.

Suskind does not say who ordered it to be fabricated but claims it came from the "highest reaches" of the White House.

Mark Mansfield, a CIA spokesman, denied that the agency was involved in forging the letter, and dismissed the book in scathing terms as belonging in the "fiction section."

Tenet said: "It is well established that, at my direction, CIA resisted efforts on the part of some in the administration to paint a picture of Iraqi-Al Qaeda connections that went beyond the evidence.

"The notion that I would suddenly reverse our stance and have created and planted false evidence that was contrary to our own beliefs is ridiculous," he said.

The book also says a British intelligence official secretly met with Habbush before the war in Amman, and that Habbush told him that Iraq had no weapons of mass destruction.

Suskind says President George W. Bush knew of the intelligence before the invasion.

Habbush was later resettled and paid five million dollars.
Posted by Alex Constantine at 11:17 AM