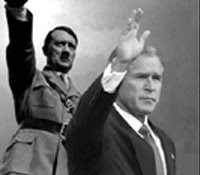 The Patriot Act ran the Congressional gauntlet like greased pork, untouched and unread, so civil libertarians opened it up and poked through its oleaginous mass prior to passage, wiped their hands, and came away with a nagging sense of deja vu - but by the time the obvious comparisons to the rise of National Socialism were made, the act was voted into law.

Then as now, the federal vaults swung open and revenue gushed through
redirected banking channels, washed through hidden corporate and "homeland security" funds, ultimately lapping on the shores of select world-class criminals, a transfer of fluid capital worthy of German and American Robber Barons alike. 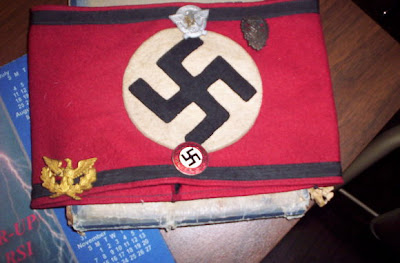 After 1915, International General Electric (I.G.E.) in New York, researcher Nhan Myrick informs us, "acted as the foreign investment, manufacturing, and selling organization for the General Electric Company." I.G.E. held a 25 to 30-percent interest in German General Electric (A.E.G.), and holdings in a company called Osram in Berlin.

The holdings gave I.G.E. four directors on the board of A.E.G., and another at Osram, "and significant influence in the internal domestic policies of these German companies. The significance of this General Electric ownership is that A.E.G. and Osram were prominent suppliers of funds for Hitler in his rise to power in Germany in 1933."

Farben, of course, was the most generous German-American financial underwriter of Hitler. "Several directors of A.E.G. were also on the board of I.G. Farben." The sinister luminaries included Hermann Bucher, chairman of A.E.G., also on the I.G. Farben board, and A.E.G. directors Julius Flechtheim and Walter von Rath. "I.G. Farben contributed 30 percent of the 1933 Hitler National Trusteeship (or takeover) fund."

The nameplates may have changed over time, but fascism has been a geopolitical constant since it was conceived by Mussolini in the 1920s, and
so have the political intrigues of General Electric.

At ChoicePoint, preceding the "election" of GW Bush, there was Richard "Killer Pimp" Armitage. Another CP director: Kenneth Langone, also a director at GE - who interlocked with the ChoicePoint directorate.

Langone received his MBA from the Stern School of Business at New York
University. He was the founder of Invemed Associates, LLC, and Home Depot, Inc. Langone has been on the board of the New York Stock Exchange, DBT Online, Inc., InterWorld Corporation, TRICON Global Restaurants, Inc. and Unifi, Inc.

He's is a familiar face in New York politics, one of the principal fund-raisers for Rudolph Giuliani in his senate race against Hillary Clinton.

During the campaign, New Yorkers switched on their television sets to see a
commercial featuring a bimbo with a heavy southern drawl, dressed in a suit,
crooning over a hot, gummy pizza called the Big New Yorker. "How do I know so much about New York pizza?" she asks. "'Cause, New York, I want to be your next senator!" A New York cop exults, "$9.99! What do they think this is, Arkansas?"2 Pizza Hut was owned by TRICON, a company under Langone's directorship.

Did the GE-ChoicePoint director's support for New York's take-charge mayor have anything to do with the fact that Rudy's mentor was none other than Adnan Khashoggi's attorney, Mr. Robert G. Morvillo, or that all three were movers in the same CIA-Mafia-corporate-Big-Boy net that has given rise to scores of headline-grabbing political scandals in the last few decades?

He is the name partner of Morvillo, Abramowitz, Grand, Iason & Silberberg, a
40-lawyer firm he established in 1973. Among his other well-known clients
was Rep. Robert Garcia, convicted of extortion in the 1989 Wedtech scandal.

In another bribery case, he won acquittal in 1987 for John Zaccaro, husband
of former Democratic vice presidential candidate Geraldine Ferraro.

He also represented the Saudi financier Adnan Khashoggi, alleged to have siphoned money from the Philippines for Ferdinand and Imelda Marcos but acquitted with them in a federal case. Two years ago he represented Robert Iler, who played the son of Tony Soprano of the HBO series The Sopranos,' on a robbery charge (he got probation). In the 1960s and 1970s, Morvillo served in the U.S. attorney's office for the Southern District of New York. He was a chief trial assistant in the fraud unit there, and then chief of the
criminal division, where he mentored a young assistant U.S. attorney named
Rudolph Giuliani."3

All contributions to Giuliani were handled by New York City Public-Private
Initiatives Inc. (PPI), headed by Ms. Tamra Lhota. "As its name suggests,"
Newsday reports, "the corporation falls into a fuzzy area among the government, the business and the philanthropic worlds, where city officials can arrange private financing for pet projects without directly soliciting funds, which would be illegal."4

Tamra Roberts Lhota was a fundraiser in all three of Giuliani's runs for
mayor. She ran PPI, according to the CUNY Clarion, "to raise private money for public projects.... PPI established and initially ran the Twin Towers Fund, which benefits the families of members of the City's uniformed services who were lost in the WTC disaster.... Members include Richard Grasso of the NY Stock Exchange, real estate magnate Jerry Speyer, NY Mets owner Fred Wilpon and former deputy mayor Peter Powers. Past PPI board members have included Henry Kissinger [and] David Rockefeller."5 Judith Nathan - Giuliani's highly-publicized "companion" through his messy divorce - was an unpaid board member. And Langone was there, of course.6

"This is shadow government," Peter Bienstock, a lawyer who chaired a state
investigation of PPI, told Newsday. "That investigation's report, issued in 1990, said of such nonprofits, authorities and foundations: Although these entities are all created by governments to serve a public purpose ... their transactions are generally not subject to normal government oversight and control. Over time, they have collectively become, in effect, a shadow government, quite powerful but little known and understood,' the study said."7

Back at his alma mater NYU, where he was a trustee, there was some
hand-wringing over Langone's association with the university. The campus
newspaper reports, "two NYU trustees who also serve on the board of the New York Stock Exchange pose a serious conflict of interest to the proper
functioning of the Big Board.... The report, released in July, also
spotlights NYU trustee Richard Grasso, who resigned last Wednesday as
chairman of the stock exchange amid criticism that a $140 million
compensation and retirement benefits package he was set to receive was too
large. The Council of Institutional Investors released the report, which
questions Sexton's ability to act impartially while serving on the stock
exchange's nominating committee.... The report cites numerous other
potentially compromising connections among board members and those on the nominating committee, beside those related to NYU. A serious overlap'
exists between the 27 board members and those on the nominating committee, Brentley said.... The council's report found only one nominating committee member with no obvious connection to the board.' Outside relationships exist among board members themselves, according to the council's report, which cited 24 such connections. Grasso had ties to five other members, Langone had relationships with four and Fink was connected to one other person, the report said."8

A few months later, Langone's Invemed, a Wall Street securitues brokerage,
was also in trouble with regulators. The company, it seems, had a close
relationship with the Credit Suisse Group dating to the 1980s. The New York
Times found that the companies together managed the shares for a company financed by Langone. Thereby, Invemed "would introduce companies that would issue stock to Credit Suisse, and then Credit Suisse would give a percentage of shares in a larger firm the group was managing to Invemed. According to The New York Times, in March 2000, Invemed participated in 50 new stock issues, more than 90 percent of which were underwritten by Credit Suisse."9

5) "CUNY's Board of Trustees: The Powers That Be,"
http://www.psc-cuny.org/ClarionBOT.htm