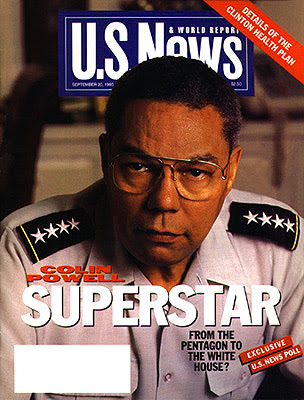 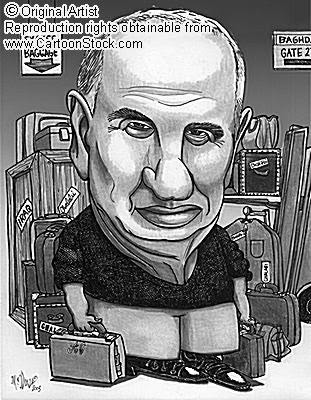 Ben-Veniste works at the international law firm of Mayer, Brown, Rowe & Maw, is a former New York prosecutor and was chief of the Watergate Task Force of the Watergate Special Prosecutor's Office (1973-75). Watergate was another massive scandal that was never fully investigated. He was also chief counsel of the Senate Whitewater Committee, and served as attorney for CIA-linked and drug smuggler and pilot Barry Seal. (The Washington Monthly 06/09/97) http://www.williambowles.info/911/911_critique.html

Gorton served on the notorious Senate Intelligence Committee for over a decade. Throughout his career, in scores of "hearings," the hawkish Gorton consistently ran interference for Iran-Contra-smeared Republicans, such as Robert Gates.

Both Colin Powell and his Deputy Richard Armitage, who casually accuse Baghdad and other foreign governments of "harboring" Al Qaeda, played a direct role, at different points in their careers, in supporting terrorist organizations. Both men were implicated --operating behind the scenes-- in the Irangate Contra scandal during the Reagan Administration, which involved the illegal sale of weapons to Iran to finance the Nicaraguan Contra paramilitary army. (Michel Chossudovsky, "Colin Powell's Role: From Iran-Contra to September 11") 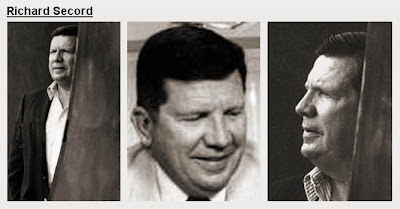 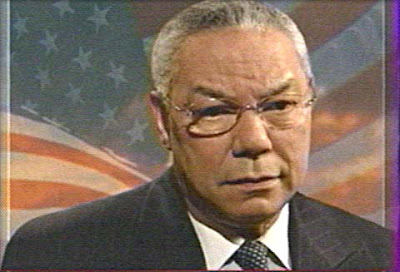 Colin Powell was among "at least five men within the Pentagon who knew arms were being transferred to the CIA." (The Record, 29 December 1986). Lieutenant General Powell was directly instrumental in giving the "green light" to lower-level Irangate officials in blatant violation of Congressional procedures. According to the New York Times, Colin Powell took the decision (at the level of military procurement), to allow the delivery of weapons to Iran: Hurriedly, one of the men closest to Secretary of Defense Weinberger, Maj. Gen. Colin Powell, bypassed the written ''focal point system'' procedures and ordered the Defense Logistics Agency [responsible for procurement] to turn over the first of 2,008 TOW missiles to the C.I.A., which acted as cutout for delivery to Iran" (New York Times, 16 February 1987)
http://www.globalresearch.ca/articles/CHO303D.html

The Contragate team that was only partially exposed by the Congressional investigations continued to operate in the deeper politics that combine drugs, oil and war. 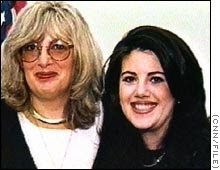 Linda Tripp, whose taping of Monica Lewinsky was reportedly inspired by Lucianne Goldberg, was in Army intelligence, held a GS-16 federal job rating, and transferred into the White House from her job with President Bush, Sr. He had of course presided over the White House operations with Ronald Reagan at the time of the Contragate operations, and was involved in them. Linda Tripp at the time was a personal secretary to Richard Secord of the Army's secret Delta Force team, and a partner in Oliver North's company that assisted in illegally passing funds through to the Nicaraguan rebels against yet another socialist government. Another covert operation run by William Casey at the CIA.

It is in this deeper context that others responsible for the Iran-Contra secret and illegal shipments of missiles, guns and drugs came back into the new Bush White House in the months prior to 9/11. They include Powell, Poindexter, Reich, Negroponte, Armitage, Abrams, among others. (See Drugs, Oil and War, Peter Dale Scott)
http://www.williambowles.info/911/911_critique.html

Henry Kissinger, Bush's First Choice for Chairman of the 911 Commission:

At one point Kissinger & Associates members were considering a merger with the infamous Bank for Credit & Commerce International (BCCI), which was deeply involved in the covert funding of both the Afghan resistance and Contragate (Congressional Report, December 1992, Senate Committee on Foreign Relations, Kerry-Brown). http://www.williambowles.info/911/911_critique.html 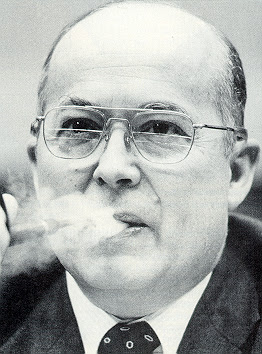 Poindexter was recruited by Syntek Technologies, a firm in bed with DARPA. His hand was back in the hi-tech cookie jar. As a company vice-president, Poindexter helped develop Genoa -- an "intelligence mining, information harvesting" system designed to explore (clandestinely) large computer databases. Listen in on America's electronic conversations, that is.

Poindexter is, once again, one of the most powerful men in America. His job description was "crisis manager".
http://www.ratical.org/ratville/CAH/NoMoreMrSguy.html 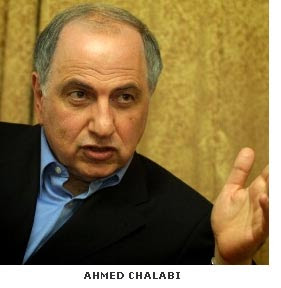 Chalabi, a non-practising Shia and reportedly a close friend of the late Shah of Iran, the former Crown Prince Hassan of Jordan and Col. Oliver North of the Reagan Administration, whose name came to prominence in the 1980s during the exposure of the Iran-Contra scandal, is the head of the Iraqi National Congress (INC), which is a member of the anti-Saddam Hussein coalition clubbed together and funded by the CIA and the MI-6 and used by the Pentagon as its cat's paw in an attempt to cover its invasion with the fig leaf of Iraqi support.

In August,1989, Chalabi fell foul of the late King Hussein of Jordan, who had him sacked after the bank had incurred huge liabilities and was on the verge of collapse. This, however, did not affect his personal friendship with Prince Hassan, who allegedly helped him to escape from Jordan before the Police, on the orders of King Hussein, could arrest him for investigation into the alleged mismanagement of the affairs of the bank. It was alleged that during his association with the bank he had embezzled nearly US $ 70 million and spirited it away in secret Swiss bank accounts According to sources close to Chalabi, part of the money was also allegedly used to fund Col. Oliver North's travels abroad in connection with the Iran-Contra operation. 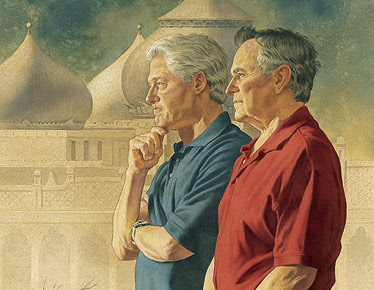 Details of George Bush's five arrests, including stripped of his TxANG flying license for desertion from Nam; Dick Cheney's 2 arrests; Bush Jr's First Lady's DWI homicide; Bush Sr's DWI arrest as Veep with mistress as told by First Lady Nancy Reagan; Bush Girls Gone Wild; Noelle Bush's narcotics arrest Invisible, hijacked, Mob-infested, Republican-infiltrated Knoxville Green Party - this website is censored and banned by the Knoxville Green Part. KGP does NOT allow its members to run for political office. Details of Ralph Nader's Y2K lawsuit to police and his lawsuit against the Bush Sr. White House for murder of journalists and narcoterrorism during Iran-Contra. Knoxville, Tennesseehome of the Mafia-connect world-wide cartel for nuclear waste, garbage-trucking, tow-trucking; the only city in world history to nuke another city; where our nuke-bomb factory INTENTIONALLY releases radiation to experiment on damage to local residents (link to 1994 White House report); ranked in 2001 as having the worst air pollution is USA by EPA; and where Mohammed Atta, an alleged terrorist on 911 and Saudi pilot trained by the US Navy flight school, allegedly took additional flying lessons in Knoxville to inquire about local nuke plants

Untold story of US Special Forces rescuing Gaddafi before USAF bombed his home in alleged assassination attempt, as told by Pentagon Chief of Public Affairs and editor of Al Gore's Carthage, TN Courrier. US alleges Pan Am 103 bombed by Gaddafi in retaliation. Bankrupt Pan Am said Bush White House's Iran-contra CIA drug dealers did it to murder Pentagon cops.

During the 1980s, Sheikh Adham and his successor as Saudi intelligence director, Abdul Khalil, secretly acted as BCCI nominees in a hostile take-over of Washington D.C.'s largest bank, Financial General Bankshares, that soon became First American Bankshares. First American was, in fact, a [BCCI] front for Mahfouz that was set up in the U.S. with the pivotal assistance of billionaire Jackson Stephens, a lavish financial backer of many political campaigns for both Bush presidents. Another principle shareholder of 25 million dollars in First American was arms merchant, Mohammed Hammoud, a long-time friend and business associate of Bahrain's Ambassador Hostler. And according to the Kerry Committee report, five Iran-contra related wire transfers were made out of North/Secord accounts at First American in the amount of $346,000.00.

One of Kamel Adham's close contacts, Adnan Khashoggi, is among the richest men in the world, who is a life-long friend of the bin Laden family and was the arms merchant at the center of the whole Iran-Contra scandal. In 1985, Sheikh Mahfouz's Saudi National Commercial Bank loaned Khashoggi 35 million dollars to purchase weapons to illegally sell to Iran, at the behest of Oliver North 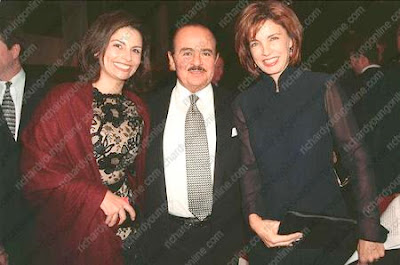 A long-time friend of George W. Bush, [James R.] Bath was connected to a number of covert financing operations in the Iran-Contra scandal, which also linked to bin Laden friend Adnan Khashoggi. Khashoggi, whose connections to the bin Ladens is more than superficial, got his first business break by acting as middle-man for a large truck purchase by Osama bin Laden's older brother, Salem. [See, Khashoggi XIX Appendix] 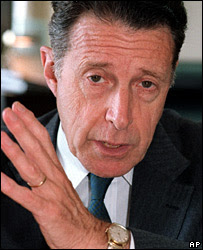 Osama bin Laden's attacks on the WTC and Pentagon, with the resulting massive increase in the U.S. defense budget, have just made his family a great big pile of money. More Bush connections appear in relation to the bin Ladens. The WSJ story also notes that, "During the past several years, the [bin Laden] family's close ties to the Saudi royal family prompted executives and staff from closely held New York publisher Forbes, Inc. to make two trips to the family headquarters, according to Forbes Chairman Caspar Weinberger, a former U.S. Secretary of Defense in the Reagan administration. 'We would call on them to get their view of the country and what would be of interest to investors.'" President G.H.W. Bush pardoned Weinberger for his criminal conduct in the Iran-Contra scandal in 1989 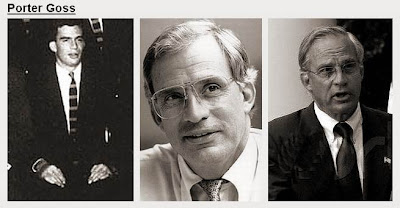 Daniel Hopsicker [unconfirmed]: "In the early 1960s there was a CIA assasination squad called 'Operation 40,' commanded by E. Howard Hunt (of Watergate fame) operating under the supervision of Vice President Nixon. A photo of several members of the group was found in the safe of [CIA cocaine smuggler] Barry Seal after the Justice (sic) Department arranged his murder. In the photo, seated between Seal and Cuban terrorist/Iran-Contra alum Felix Rodriguez, across the table from Watergate burglar Frank Sturgis and Kennedy assasination suspect William Seymour, and together with Iran-Contra member Luis Carriles Posada and 'Blonde Ghost' Ted Shackley, is Porter Goss!"

During his Arbusto period, in 1979, James Bath purchased a Houston mansion for Mahfouz at 4.3 million dollars, with the payment made through none other than James Baker III's law firm, Bakers and Botts. In 1990, during his Harken period, Bath obtained a 1.4 million dollar loan from Mahfouz. Bath was also the sole director for Mahfouz's Skyway Aircraft Leasing Ltd, which did a brisk business with Saudi Sheikhs and began in the Grand Cayman Islands in 1980 as a company briefly called Cotopax Investments. It should be noted that several unusual business behaviors of Mahfouz's Skyway Aircraft Leasing Ltd. demonstrated a pattern reminiscent of money laundering. First, within a month of its incorporation, the temporary board at Cotopax named Bush's friend James Bath as company president, changed the company name to Skyways and then resigned en mass, leaving Bath as a sole director. Second, the Cayman Islands are an effective tax-shelter and haven for banking secrets. Third, one of the original subscribers to Cotopax, a company called Cayhaven Corporate Services, Ltd., was also a subscriber to IC, Inc. In reality, IC Inc. was the same entity as ICIC, which is the International Credit and Investment Corporation of Grand Caymans, termed BCCI's "bank-within-a-bank" in the Kerry Committee report. Curiously, Mahfouz's "IC Inc.," the company related to George W. Bush's friend James Bath, was found by investigators to be at the very center of a chart drawn by Oliver North, in North's own White House safe, that showed the private banking network supporting the Iran-Contra operation 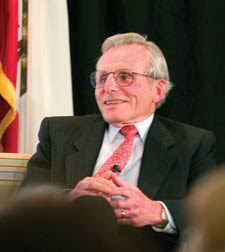 The warnings about the Carlyle Group, the nation's 11th largest defense contractor, and the Bushes came long before the World Trade Center attacks. The Carlyle Group is a closely held corporation, exempt, for that reason, from reporting its affairs to the Securities and Exchange Commission. As of October 4, 2001, it has removed its corporate web site from the World Wide Web making further investigation through that channel impossible. Its Directors include Frank Carlucci, former Reagan Secretary of Defense; James Baker, former Bush Secretary of State; and Richard Darman, a former White House aide to Ronald Reagan and Republican Party operative.

Armitage received Pakistan's highest award available to a civilian by virtue of his assistance to the mujahideen in Afghanistan during the 1980s, in part, by supplying the fighters with shoulder-launched Stinger missles, that have not yet been recovered by the U.S.. Currently, Carlyle's Frank Carlucci and the re-emerged Richard Armitage, are board members of the influencial Washington think tank, the Middle East Policy Council. ...
Posted by Alex Constantine at 11:44 AM