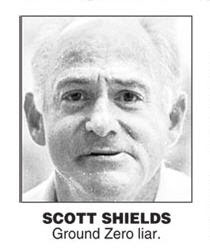 A former Greenwich man who credited himself and his golden retriever Bear with recovering bodies at the World Trade Center after Sept. 11, 2001, has been sentenced to eight months in federal prison after his conviction for fraudulently obtaining thousands of dollars in government relief funds, according to court records.

Shields pleaded guilty earlier this year to illegally obtaining government money from two agencies, including the Federal Emergency Management Agency and American Red Cross, according to documents on file in the U.S. District Court for the Southern District of New York.

He was arrested, along with his sister, Patricia Shields, in March 2007 and initially pleaded not guilty, records show. In March 2008, Scott Shields changed his plea to guilty, according to court records.

"Mr. Shields has pleaded guilty to defrauding the American Red Cross and FEMA, in an attempt to exploit programs that were providing financial assistance to people affected by one of this country's greatest tragedies," read the sentencing opinion handed down by District Judge Robert Sweet on Oct. 14.

The sentence opinion said that Shields had a previous conviction for bank fraud 18 years ago involving a "significant sum."

After his release from prison, Shields will enter into three years of supervised release. He also was ordered pay back $49,439 to the government. His sister received an identical sentence.

According to court records, Scott and Patricia Shields applied for mortgage and rental assistance from FEMA after Sept. 11, 2001, claiming they lived in Manhattan at the time. However, government records show they were living and working in Greenwich and not eligible for FEMA assistance.

The aid only was meant for people who lived near the World Trade Center, those who had been injured by the events and businesses that were damaged.

Scott and Patricia Shields were evicted from their rental unit in Greenwich in October 2001 for nonpayment of rent, court documents show.

While they did move to lower Manhattan after their eviction, they were not eligible for the funds they received and did not use them to pay rent owned on their city apartment, according to court records.

They were evicted for nonpayment of rent at the Manhattan location, according to court records.

Scott Shields' sentencing comes after six years of making claims about his search and rescue exploits, which were detailed in a book titled "Bear: Heart of a Hero," credited to Captain Scott Shields and co-author Nancy West.

The book was pulled from shelves in 2006, according to a spokesman from the publisher, Hero Dog Publications, after the firm realized Shields was not a captain.

Shields' main claim was that he and his dog Bear aided in the rescue of victims at ground zero. Roy Gross, chief of the Department at the Suffolk County Society for the Prevention of Cruelty to Animals, whose organization maintained logs of every dog who assisted in the rescue effort, said Shields and Bear were never documented in its records.

"He was a fraud, unfortunately," Gross said.

Shields claimed in a Greenwich Time article in 2001 that he was a marine safety specialist who consulted with the New York City parks department.

Phil Abramson, a spokesman for the New York City Department of Parks and Recreation, said the department was aware of Shields' claim, but that it was not true.

Shields' Manhattan-based attorney, Joel Mark Stein, said he had no comment about the case.

Shields is scheduled to being serving his term on Wednesday, according to the clerk's office for the United States District Court in the Southern District of New York.

- Staff Writer Debra Friedman can be reached at debra.friedman@scni.com or 625-4439.
Posted by Alex Constantine at 12:51 PM

One of the nost amazing leaders in nParks SAR was arrested after turning in police chief ofr not having the credential to be managing the site (7 yrs after Bernard Kerick was convicted of Scott's accusations. Scott was also suppossed to testify in Federal court about Juilani's involvement with tthe cover-ups of 9/11 hazmat ordered by both mem.

The internet has been used to vilify somewone who everyone in the service looked up to and who we knew put the people before self.

By theway 2 of his chief accuser have since been sentenced to 3 yr term with the feds for computer fraud against Scott.

They do shoot the messengers